Pumpkin rolls and a tart

Mrs. Oana, Andrei Crivăț’s mother, sent me a recipe for pumpkin cake. Very nice recipe! It lighted many ideas. Not even a day after receiving the recipe, I saw another one that I liked, On Roxana’s blog. Since I don’t want to smother you with pumpkin recipes but at the same I don’t want to let something good get away, I’ve decided to combine the two recipes. I took the dough from Roxana’s recipe because it seemed very easy to make (I congratulate myself on that, not only because it’s a good dough, but also because I found a way to improve it) and the filling from Mrs. Oana’s recipe, because it seemed spectacular. I also added something on my own and I obtained two rolls with pumpkin filling and one beauty of a tart. Here’s how:
I gathered all the ingredients: for the dough – two cups of flour, an egg, one tablespoon of sugar, a bit of salt, a tablespoons of honey, one tablespoon of apple vinegar, two tablespoons of oil, one cup of lukewarm water. For the filling – one large piece of pumpkin ( I chose a sweet, very ripe pumpkin), two cups of sugar (I store the sugar in the airtight jar you see, together with two vanilla pods, this way I always have vanilla flavored sugar), a few walnuts and a tablespoon of cinnamon. 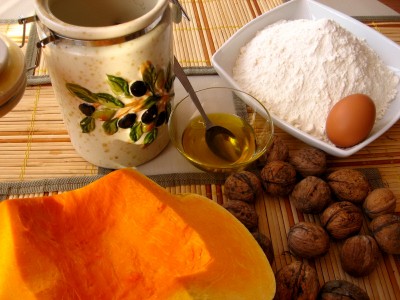 I kneaded the dough until it came off my fingers (about 7-8 minutes) and I let it rest. Afterwards, I proceeded to the hard work. 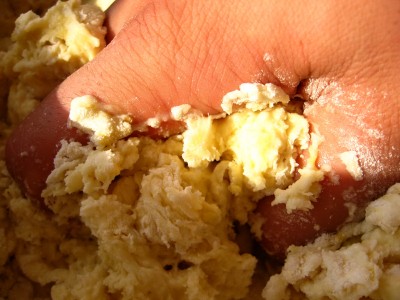 I cracked and cleaned the walnuts. 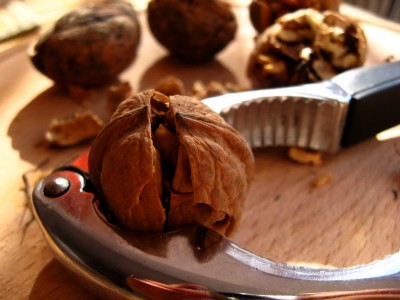 I boiled them in wine with sugar and a bit of cinnamon. This gave the walnuts flavor, it softened them and it persuaded them to leave their flavor on our taste buds. 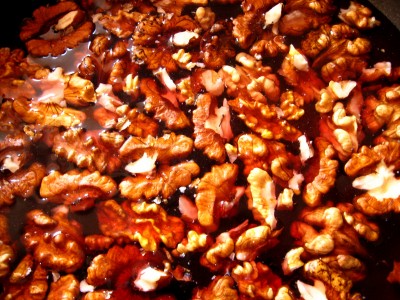 I diced (not to small) the walnuts with a knife. 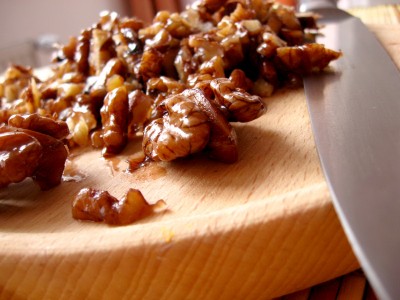 I grated the pumpkin (just the pulp) and I mixed it with sugar and cinnamon. I then put it in a large skillet, with a no-stick bottom. I softened it on the stove for about a quarter of an hour, without any oil or water. 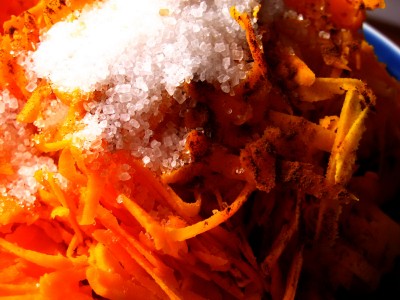 I stretched the dough into rather thin sheets. I did that directly on a piece of parchment paper. This makes rolling them in the end a lot easier and you waste a lot less flour than of you did the same procedure on a board. 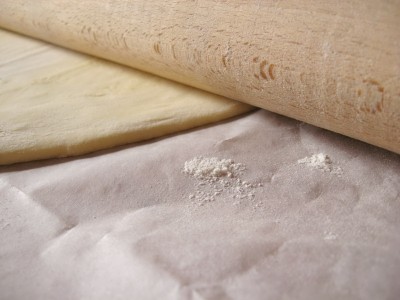 I put the filling over the sheets, plenty of it and on half of the surface. By filling I mean pumpkin+nuts. 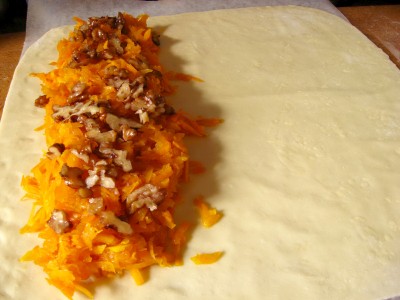 I then rolled the sheets and I obtained two rolles. 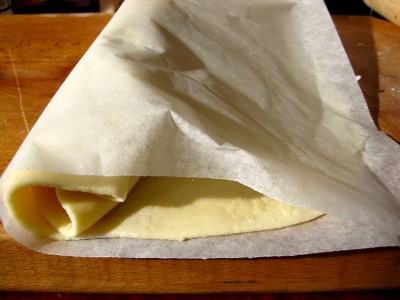 I made incisions on each of them and then I brushed them with a whisked egg. 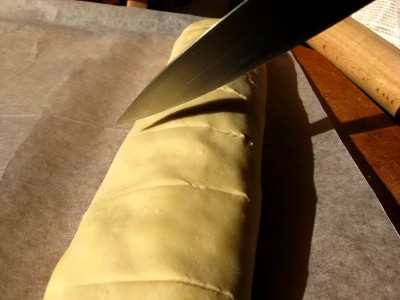 Because I had ingredients (and people to make it for), I also make a tart. I mean I stretched a thin sheet of dough and I placed it in a round tray which I had previously buttered and powdered with flour. I added the filling over the dough… 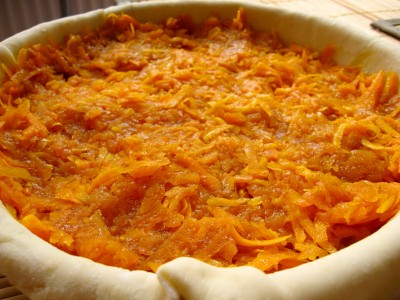 …I cut the margins that were hanging out of the tray and from them I made another thin sheet of dough, which I used to cover the filling. 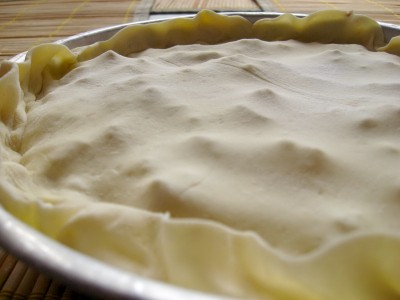 I also brushed the tart with whisked egg and I pricked holes here and there. I then put the trays (this one and the one with the rolls) in the oven. 35 minutes at 170 degrees Celsius. 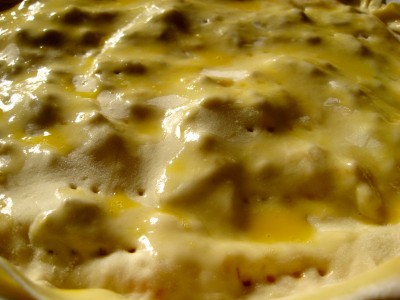 After I got the trays out of the oven, I let them 5 more minutes to get some air and then I sprinkled powdered sugar over them. 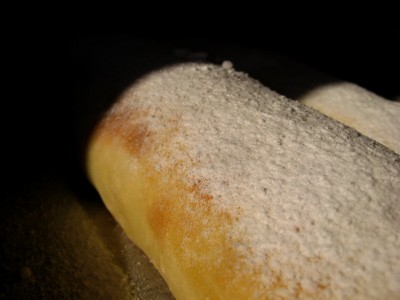 This is a piece or roll. Andrei was generous enough to split his piece with Groparu and Zicu from TVDece. 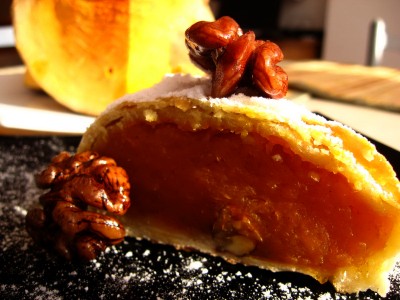 As if the tart and the rolls hadn’t been enough, I also baked a few chunks of pumpkin. Today they’re headed to Baia Mare with us. 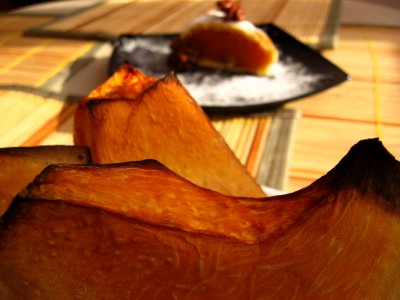 People say it was good. If they were lying then I’m lying too (fairytales had that line, right?). 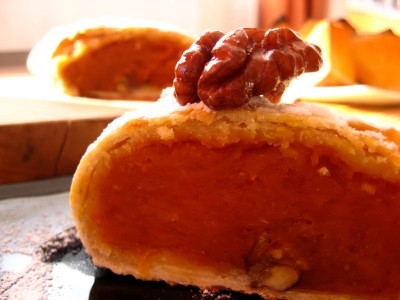 On Wednesday I will make another tray (three-four rolls) to offer as BONUS to those who order from my special menu at Irish&Music Pub. 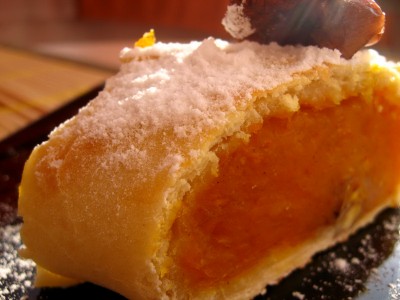 Ah! I almost forgot about the tart. 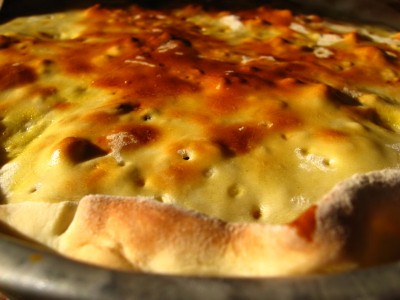 Have I ever had a longer post? Stay healthy, I’ll stop here. 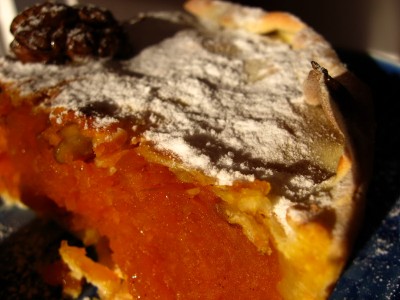